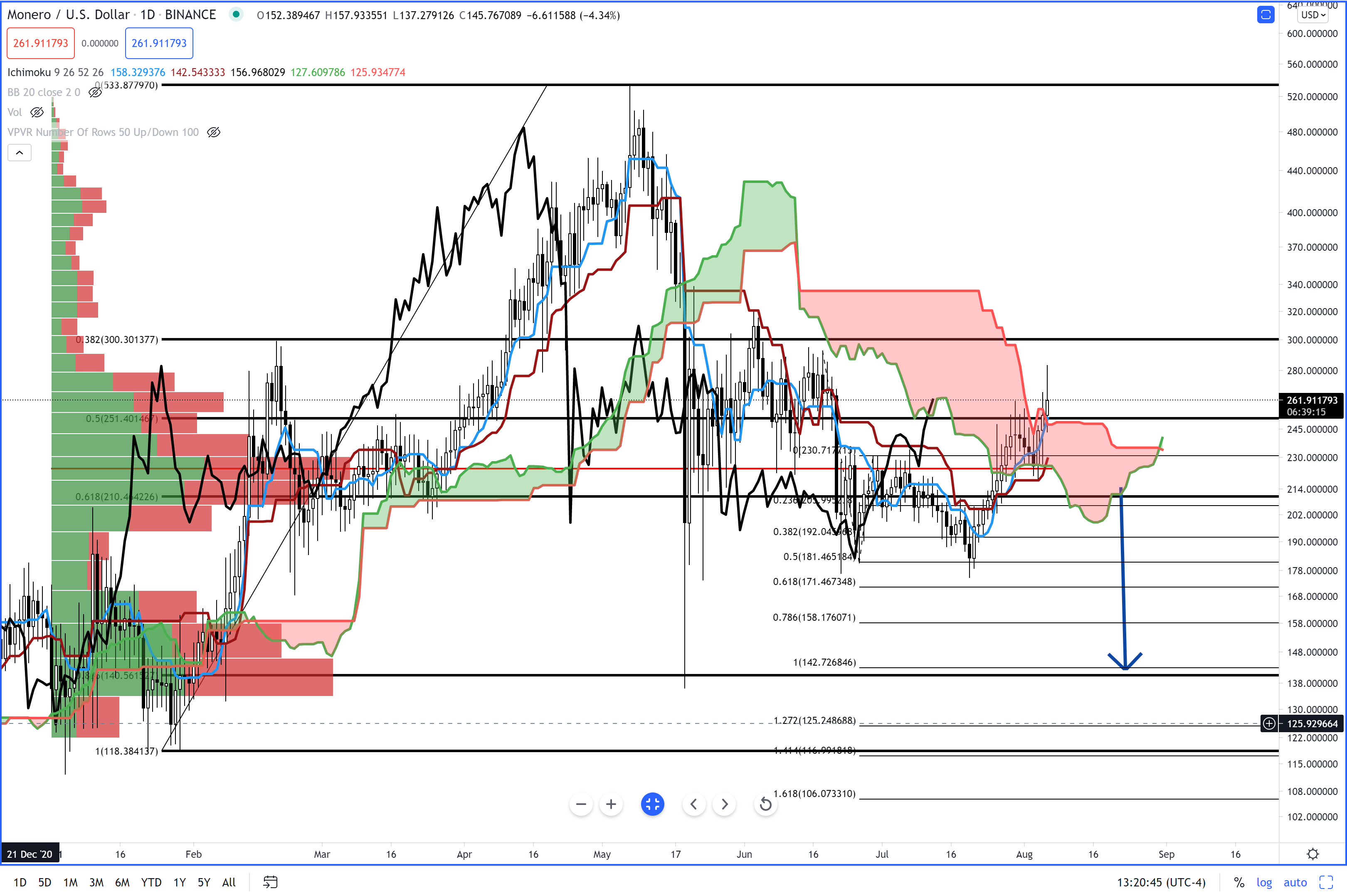 There’s plenty of reasons to anticipate both a deep retracement or a continued drive higher on Monero’s chart. The 2021 VPOC (Volume Point Of Control) for Monero is at $225.14. The bottom of the Cloud (Senkou Span A) and the Kijun-Sen are within that $225 value area as well. A buy limit order at $225.50 couldn’t hurt in the event of a weekend drop and retest of this zone as support. On the long side of the market, I like any long above the Cloud, but only if my entry is below $275. Another idea would be a buy limit order at $251, which is the 50% Fibonacci Retracement and top of the Coud (Senkou Span B). Profit targets on these entries would be between $288 and $335. 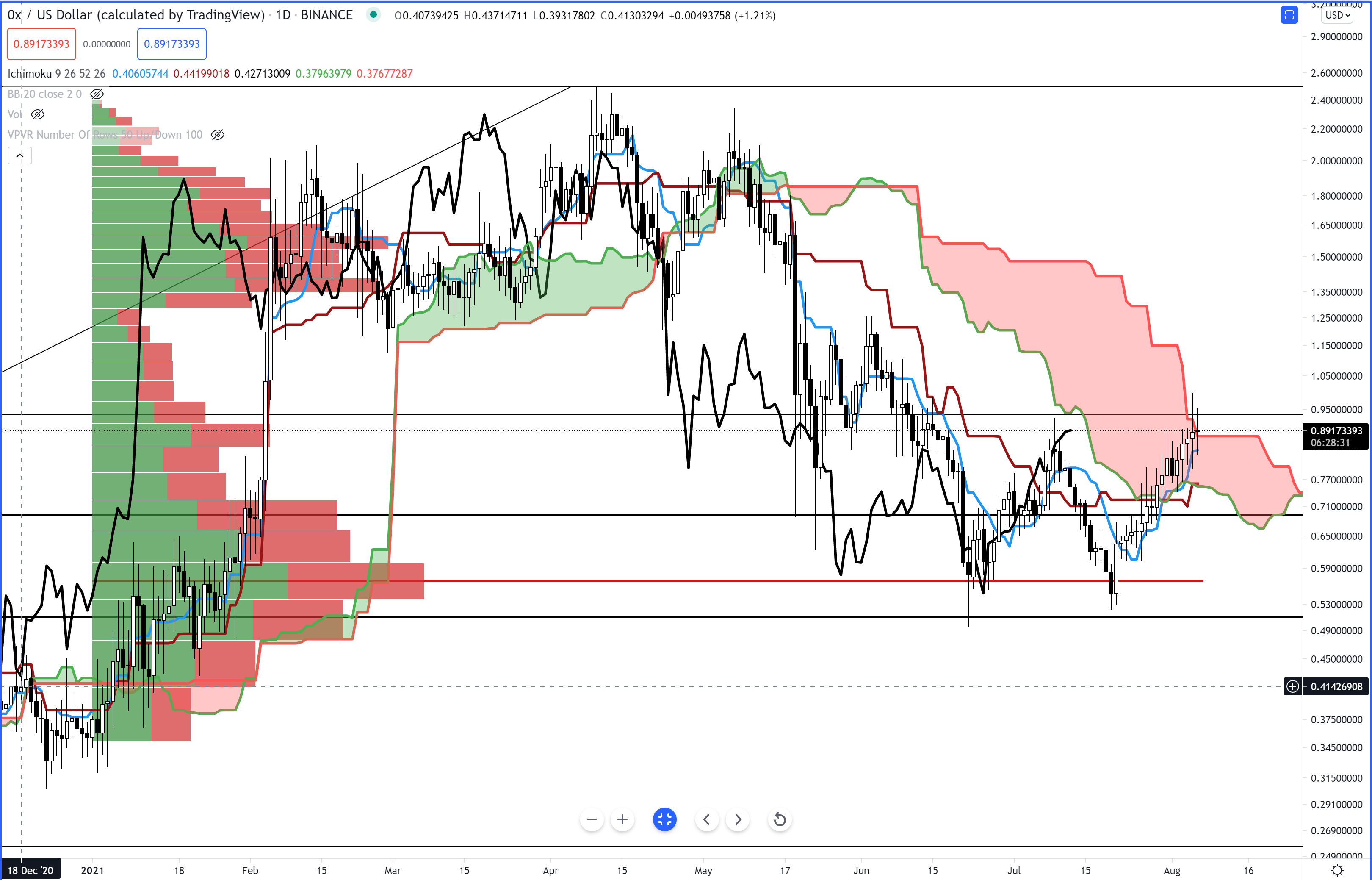 0x has been one of the surprising leaders thus far in 2020. Something that 0x has not had to experience that many other crpyotcurrencies have (such as Cardano and Stellar), is a very prolonged and extremely tight trading range inside a thick Cloud. At the time of writing, 0x is one of the few altcoins that is trading above the Cloud. This is extremely bullish for buyers who are looking or conservative entry opportunities. If 0x can close above $0.879 on the daily chart, a confirmed Ideal Bullish Breakout trade strategy in Ichimoku is available. As a reminder, the following conditions need to be met for this strategy to take effect:

2.Tenkan-Sen great than Kijun-Sen and the close greater than both.

3.The Lagging Span above the candlesticks.

4.Close is above the Cloud.

The profit target zone is quite extended from the present value area. If 0x moves above the 38.2% Fibonacci Retracement at $0.935, then it may very explode to the next high volume node in the volume profile at $1.3363. 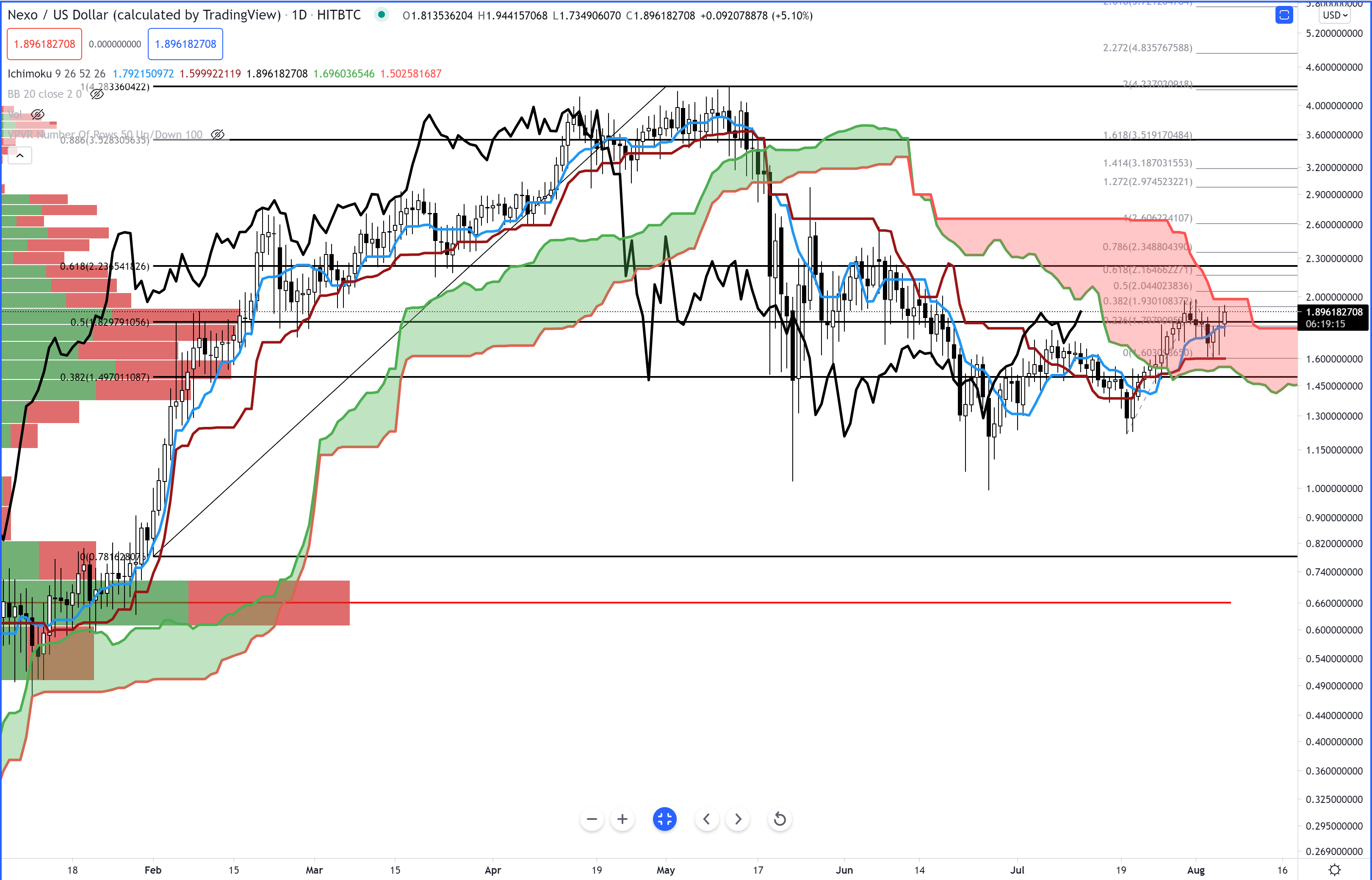 Nexo has become a personal favorite of mine lately – especially because of its generous interest rates on Cardano, which are higher than what you could get staking Cardano! Anyway – the present value area is setup for a major breakout soon. Nexo is still inside the Cloud, but there is clear momentum building that could likely push it up and out of the Cloud very easily. That being said, I like any entry between $1.90 and the 50% Fibonacci Retracement at $1.83. The profit target range could be split into two clear zones. The first is the 38.2% Fibonacci Retracement at $2.23 and the 100% Fibonacci Extension at $2.60. A quick note about the price level of $2.60: When the Lagging Span approaches that if the Lagging Span is trading near $2.60 anytime between today and August 19th, it will be trading against the top of the Cloud and could act as strong resistance.

Also watch for any major drop over the weekend. If Nexo were to close around $1.44, we could very quickly and easily see sub $1.00 levels.