The number of crypto users reached 221 million in June 2021, according to a new research report from Crypto.com.

What Happened: The report revealed that the market size doubled in just four months, driven by massive institutional adoption and new retail participants drawn in by the “celebrity effect” of Tesla Inc (NASDAQ:TSLA) CEO Elon Musk.

“Although Bitcoin drove the growth in January and February of this year, substantial growth in altcoin adoption in May 2021 pushed the global crypto population to a new high,” read the report.

The growth in altcoins was led by meme-tokens like Shiba Inu (CRYPTO: SHIB) and Dogecoin (CRYPTO: DOGE), which attracted the most attention from newer retail market participants.

Meanwhile, Crypto.com’s analysis revealed that while Bitcoin (CRYPTO: BTC) led the growth in new users from January to April, Ethereum (CRYPTO: ETH) saw the most growth between May and June, drawing interest mostly from institutional investors. 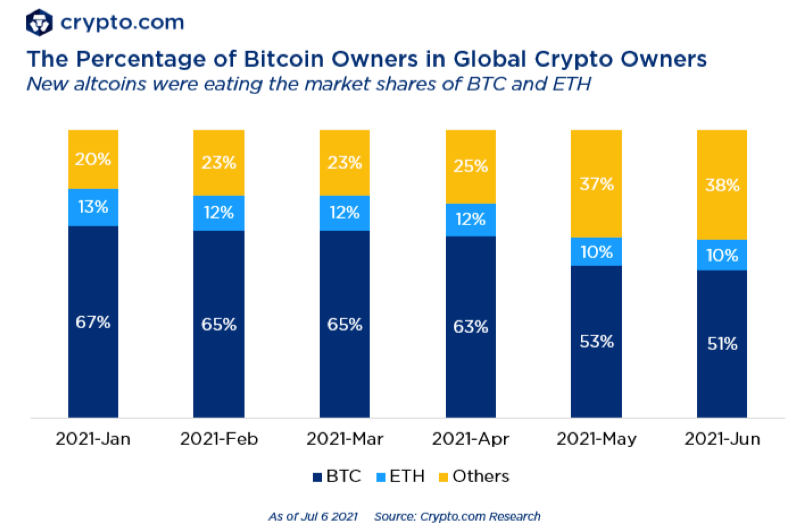 However, the months of May and June were also defined by the market leaders losing their share of the market to newer Proof-of-Stake (PoS) tokens and meme-coins.

Despite losing some momentum these newer tokens, the past few days have seen Bitcoin lead the market a leg up, with the leading digital asset reclaiming $40,000 once again.

Read next: Ethereum Outperformed Bitcoin And Every Benchmark Asset In The First Half Of 2021: Coinbase