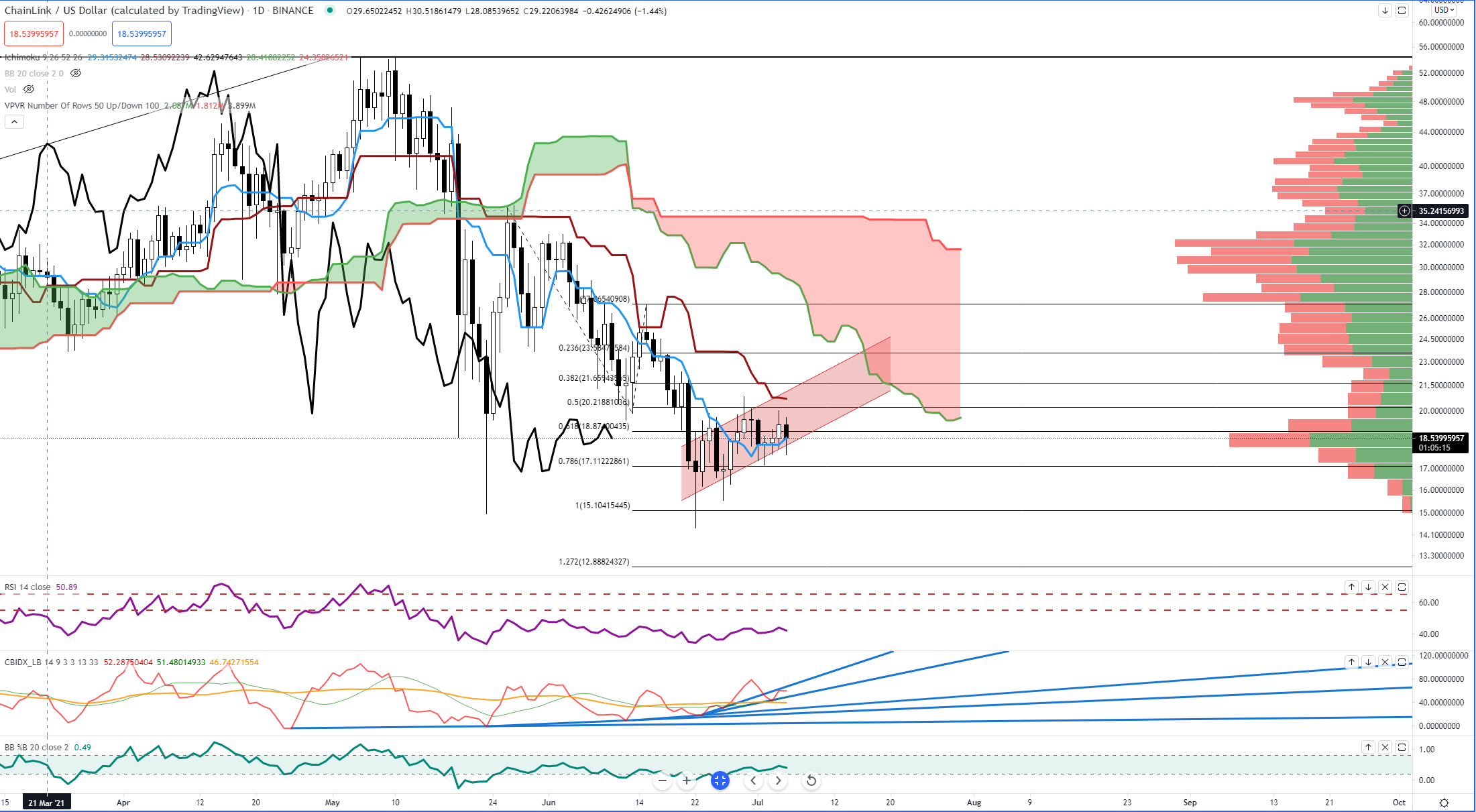 If ChainLink (LINK) moves closes the Tenkan-Sen would likely see the Composite Index break below a recent trend line, initiating a strong move south towards the next high volume node at $12.50, but below that is the 38.2% Fib Retracement and 161.8% Fib Extension, both at $10.50. I’d only be sightly bullish if the Chikou Span closes above the candlesticks, but that would mean a return to the $26.00 range. Bearish pressure remains strong here. 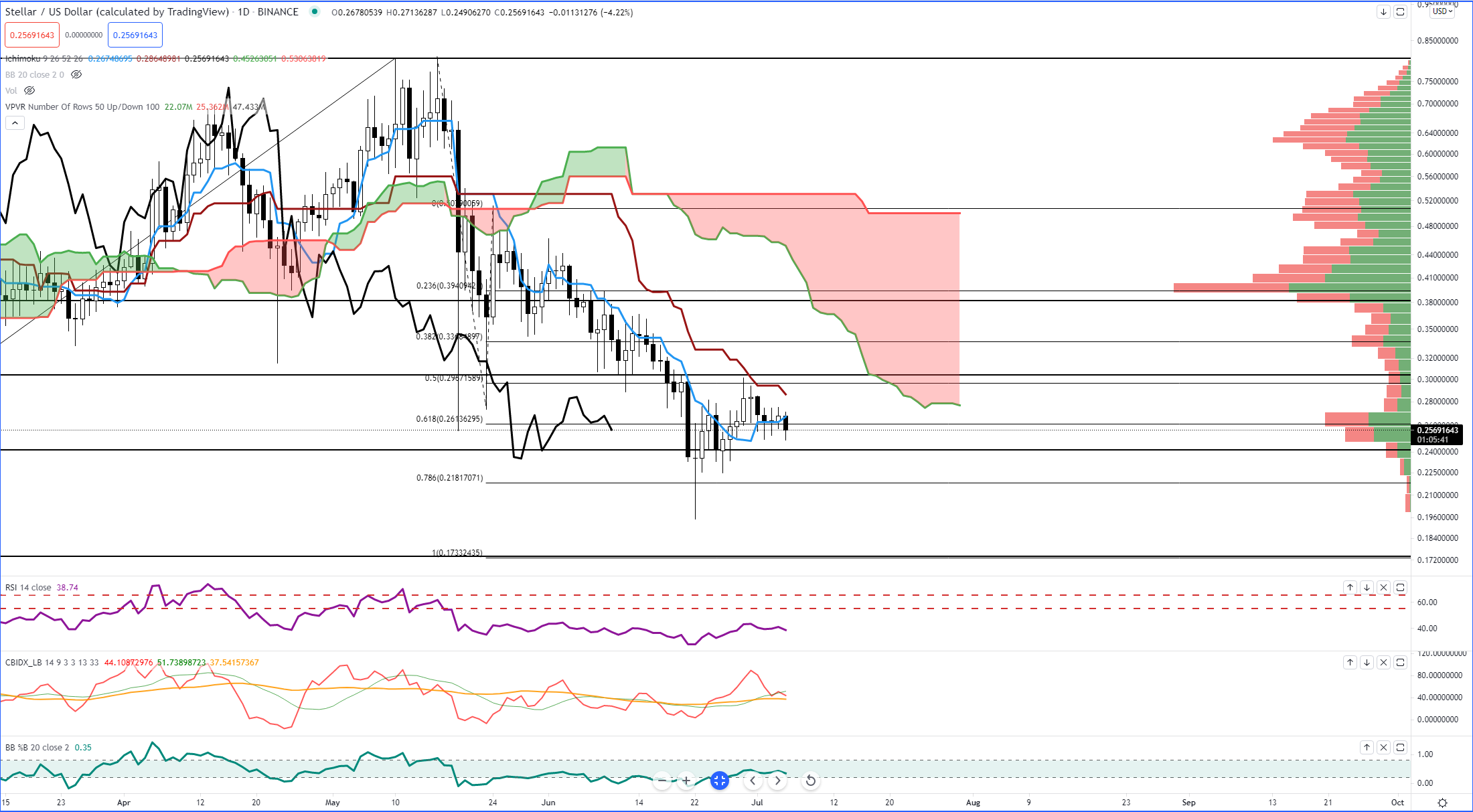 Stellar (XLM) shows near term support on the weekly chart, so this will be one to watch. Chikou Span near the top of the body of the candlestick and the curreny weekly close is just above Senkou Span A – a support zone between $0.25 and $0.29 will need to hold to remain bullish on the weekly. Daily chart continues to show a push towards a confluence zone between $0.175 (78.6% Fib Retracement and 100% Fib Extension) and $0.1980 (high volume node). Would only consider looking at the bullish side now on the daily chart if the Chikou Span closes above the candlesticks, which would mean Stellar would have to return to $0.35ish. 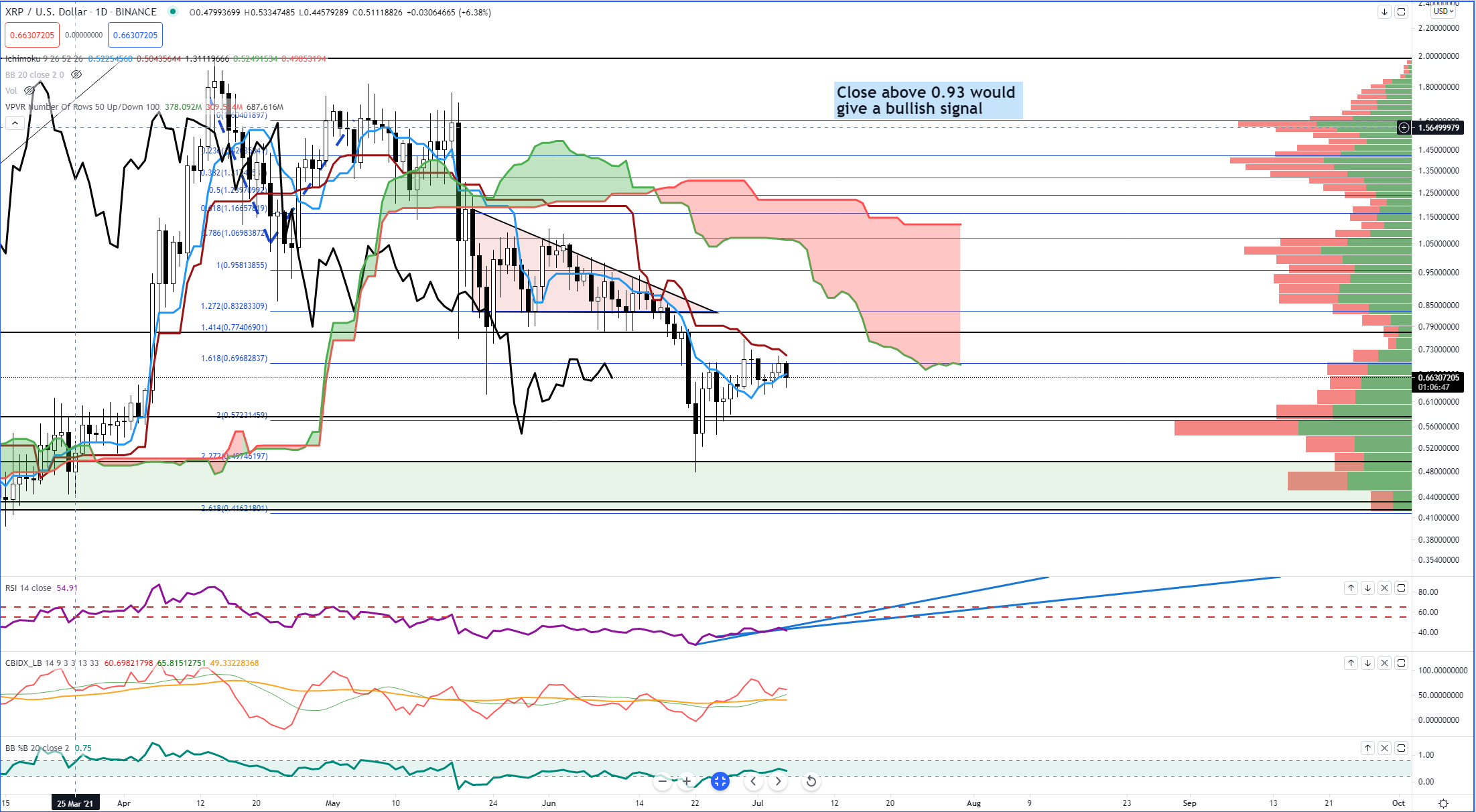 The weekly hidden bullish divergence could easily be removed here soon. Ripple (XRP) on the weekly chart looks good for its weekly RSI to test the 40 level, thereby negating the hidden bullish divergence. Ripple (XRP) looks poised to revisit the support zone between $0.45 and $0.52. Daily RSI break below two trendlines, imminent cross under of the Composite Index below its averages and the %B showing signs of moving below 0.2 all point to a bearish continuation move. Major support exists at $0.43 where the 61.8% Fib Retracement and 261.8% Fib Extension sit. Below $0.43 is a major drop towards $0.32 – $0.33. Bullish only when the Chikou Span moves above the candlesticks, which would mean a return to the $0.93 value area. 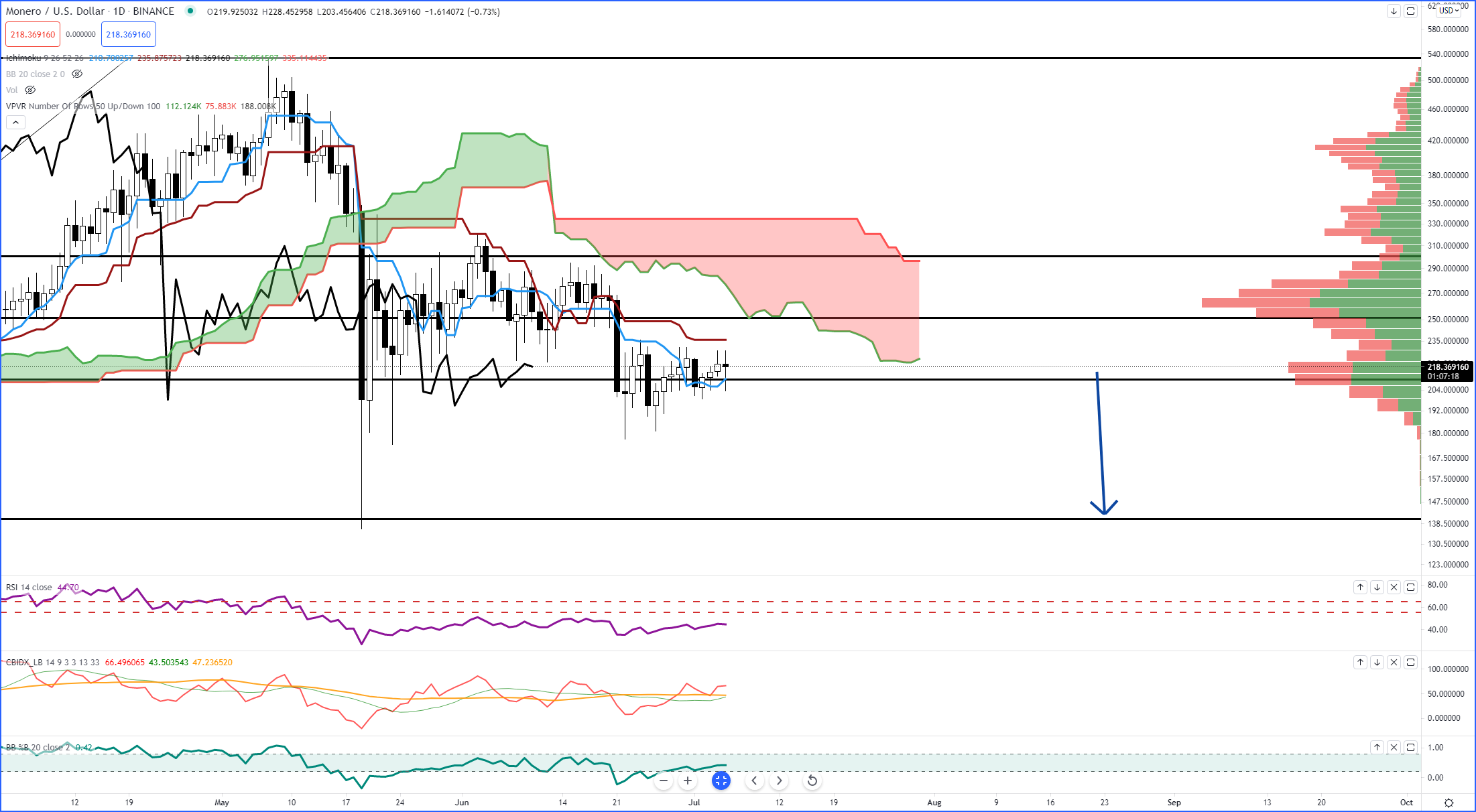 Monero (XMR) weekly chart shows that a major setup could generate a major drop here. The 61.8% Fib retracement is the final major fib support and a move below that level shows its easier to move lower than higher in the volume profile. New historical lows on the weekly Composite Index. With the RSI showing a high probability of testing the 40 level and the %B about to cross below 0.2, I won’t be surprised to see Monero pushing the 88.6% Fib Retracement at the $140.56 value area. The daily setup really confirms continued weakness on the weekly chart. Once the %B crosses below 0.2 and the Composite Index drops below one or both of its averages, we’ll going to see a flash crash to that $140 zone. Massive volume trough in the volume profile. 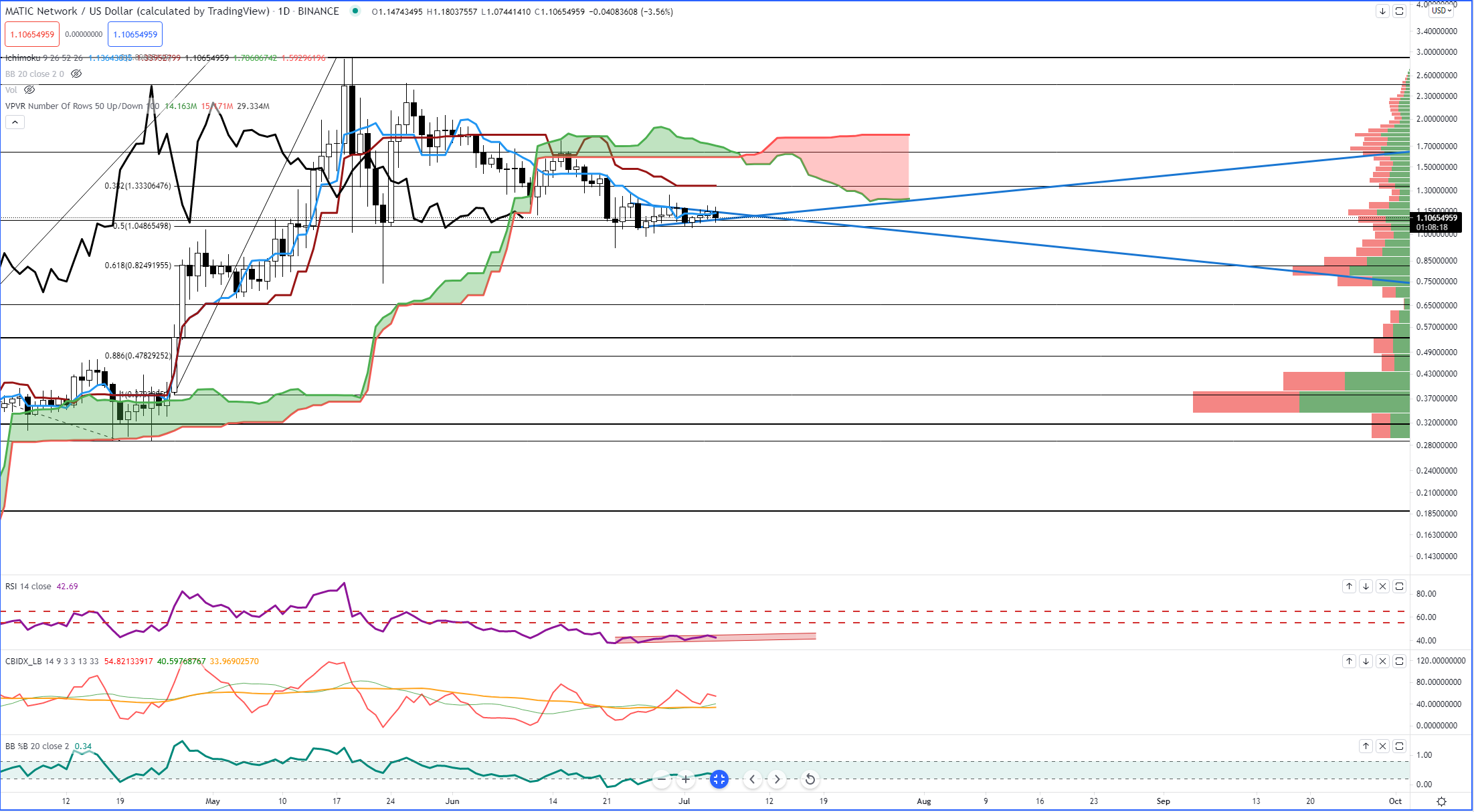 Polygon’s (MATIC) weekly close for last week was an inside bar, further constricting the price action and range necessary to see a clear bullish or bearish move ahead. Continues to trade below the weekly Kijun-Sen and Tenkan-Sen. The first overbought level on the weekly RSI of 50 still has not been tested while the Composite Index makes new historical lows. Daily chart shows a clear bearish pennant with a bear flag on the RSI, pointing to a test of the first OS condition in a bear market at 30. A close below the 50% Fib Retracement at 1.04 will likely mean a test of the high volume node and 61.8% Fibonacci Retracement at $0.82. If $0.82 fails, then it’s a faaaaast move south to $0.45.