– Gann’s analysis is a multidimensional form of analysis combining time, price and geometry.

– Gann’s work can be used to identify possible major turns in a market.

The chart above is Cardano’s weekly chart (ADABTC chart). It has spent the past 14-weeks in a considerable downtrend that has seen Cardano drop from the 2019 swing high of 0.00001944 to the swing new swing low of 550 (-71.71%), which is also the new all-time low on Binance’s ADABTC chart. It is presently just above final Major Harmonic, the 0/8th Major Harmonic at the 0.00000529 value area. I have written about the importance of the 90-day cycle as recently as last Thursday, but I also wanted to discuss what Gann called the ‘Death Zone’. The ‘Death Zone’ is a 49-day cycle that Gann considered to be exceptionally powerful. When something moves down for 49-day at a fast pace, then the probabilities of it reversing are extremely high. Cardano is currently in its 6th consecutive week of weekly closes below the weekly open. It is entirely possible that we will see this upcoming week create a powerful move higher. But price also trading against the 1×4 angle (blue diagonal angle), which typically reacts as a very, very powerful and fast rejection zone. 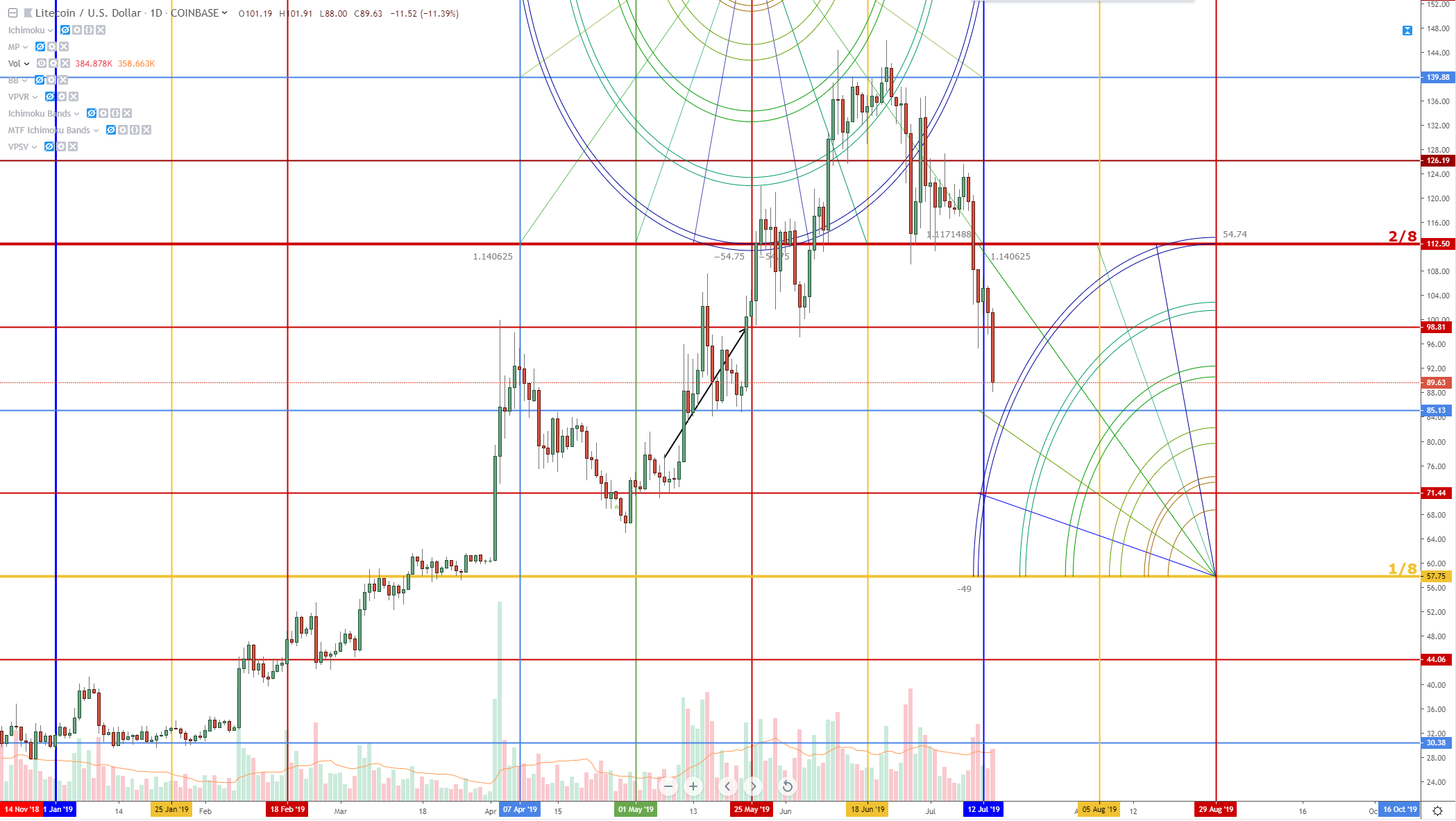 Litecoin is experiencing a behavior that was expected and one that is common. The blue vertical line the is beginning and end of a 192-day Law of Vibration cycle. This end/beginning acts as a source of resistance in time to the trend in force. The probability of a trend reversing or correcting is increased depending on the length of the trend prior to the new Law of Vibration cycle. Litecoin has been in a clear uptrend for the past 192-days. From the swing high, we should expect to see at least a 50% retracement of the prior move, which would mean Litecoin would have to tag the 84.03 value area, which is also within the 4/8th inner harmonic at 85.13. The 4/8th inner harmonic is the 50% price level between the 1/8th Major Harmonic at 57.75 and the 2/8th Major Harmonic at 112.50. After a 50% retracement, we could expect to see a continuation of the bull move. 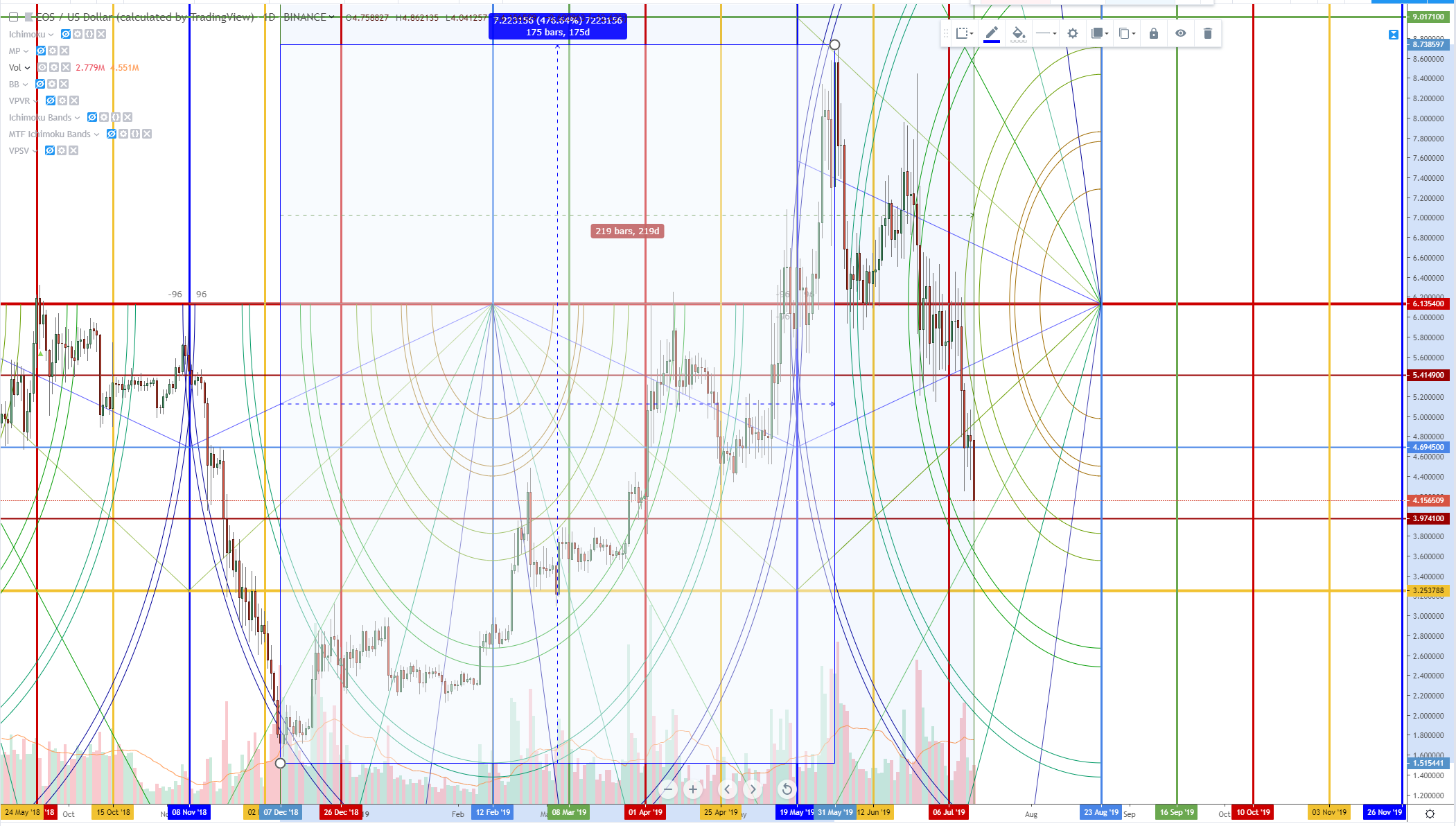 EOS has been a strong performer since bottoming out on its most recent major swing low of 1.515441 on December 7th, 2018. From that low it has moved over +476.64% to a swing high of 8.7385 on May 31st, 2019. Every since May 31st, EOS has dropped well below the 50% threshold of the prior swing from 1.515 to 8.738. However- that corrective move may be at an end. There is a square of price at 3.97 on July 6th. This is a particularly important and powerful region where we could see a violent reversal occur. Both the time and price harmonics are natural pivots and are both 2/8th harmonic pivots. Price has tagged that price level and we should observe a nice rise from this value area in the very near future.

Save money on your currency transfers with TorFX, voted International Money Transfer Provider of the Year 2016, 2017 and 2018. Their goal is to connect clients with ultra competitive exchange rates and a uniquely dedicated service whether they choose to trade online or over the telephone.
Find out more here.