Bitcoin price jumped higher on Tuesday, backed by positive tailwinds from the stock markets that booked solid gains during both the EU and US trading sessions. With the current rollover in risk sentiment, it will be key to watch how and where support will hold.

Bitcoin price will look for support before the retest to $53,350

Bitcoin (BTC) price rose 6% on Tuesday and has risen 27% since September 21 – the start of the current bull run. A repetition of the pattern shown on October 1 and 2 would be the perfect playbook to give bulls an additional entry point. This would open more room for further upside toward $53,350.

With the bounce off the monthly R1 resistance level at $51,589, BTC price action might see some short-term profit-taking, with support at $50,019. With bulls keeping price action above $50,000, it shows confidence and signs of a healthy rally to the markets. It adds conviction as well to the Relative Strength Index (RSI) that was flirting with “oversold” status but now is back to more normal levels.

Expect Bitcoin price to bounce off $50,019 or sooner and have bulls charge further up toward $53,350, and in their path breaking the monthly R1 resistance level at $51,589. This will turn the latter level into support, in favor of the bulls.

In case market sentiment chops up the positive tailwinds in cryptocurrencies, expect bulls to quickly take profit. Bears would be handed the opportunity to break some crucial support levels in that case. Certainly, the $47,065.70 level that falls in line with the 55-day Simple Moving Average (SMA) fits that bill. In case bulls cannot hold that level against some bearish reaction, expect the bull run to be short lived.

Ethereum (ETH) price action is in heavy weather as bulls are not able to defend the double support level at $3,370. With that area comes a 50% Fibonacci level at $3,370 and a historical level at $3,391 just above. With bulls closing their positions either flat or with marginal gains, the entry is there for bears to run price action further down.

With global sentiment today on the back foot, the supportive tailwind in Ethereum price is completely gone and the bull run looks to be stalling. Expect a break lower toward the monthly pivot  at $3,245 and further below the 38.2% Fibonacci level at $3,200. 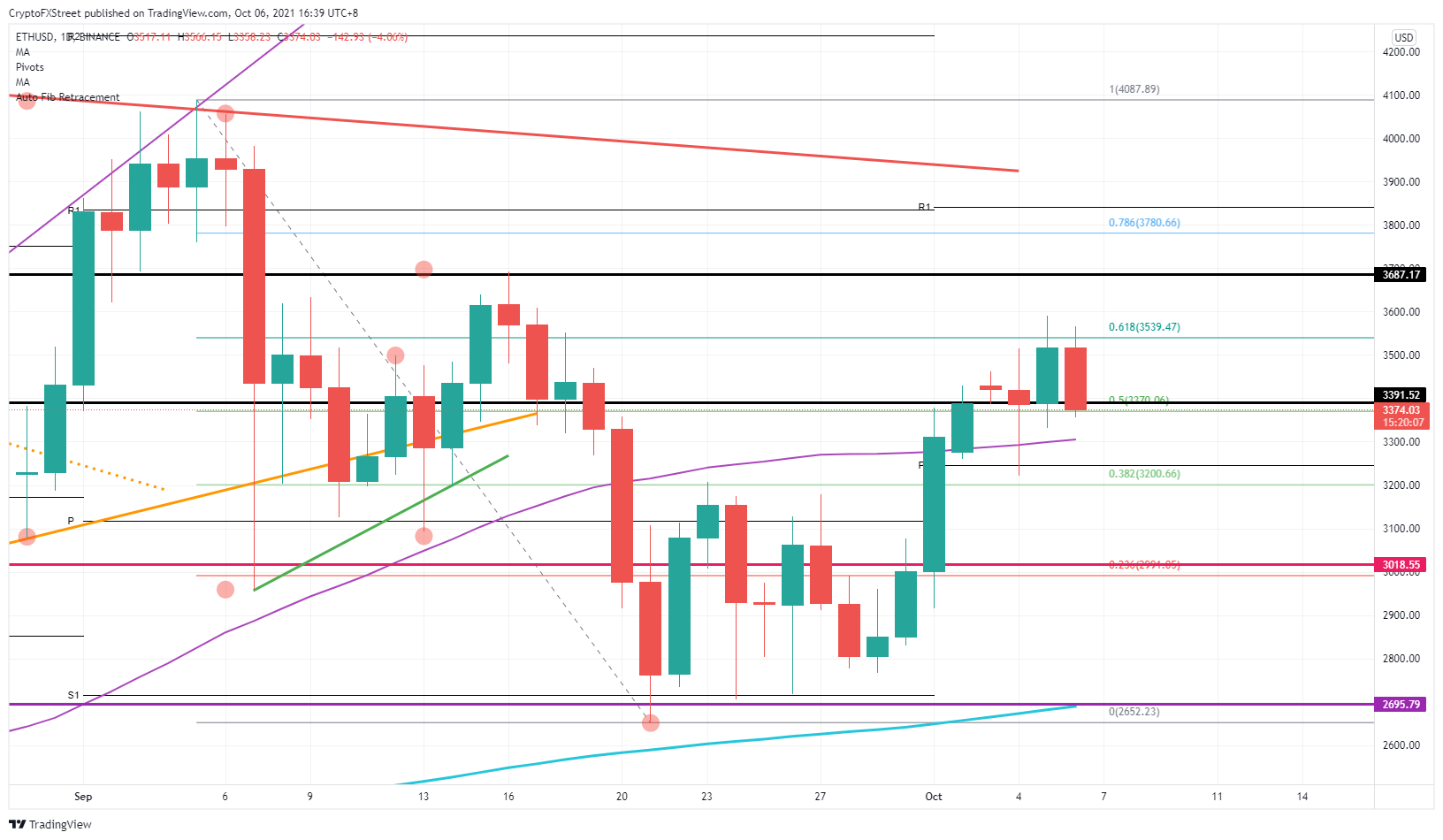 With that said, the overall longer term bull run still looks intact. As soon as markets have let the dust settle on this negative trading day, expect bulls to run price action in ETH back up again to target $3,687 for a retest.

Ripple (XRP) price has been rejected off the $1.09 historical level and spells not much positivity for the further bull run. The 55-day SMA proved already to be too heavy to overcome for bulls on Tuesday. With price action fading, bears are attempting to run price action down toward the 200-day SMA near $0.98.

In this way, bears will face a double bottom with the low of October 4. Add to that the psychological level of $1, and bulls have three reasons in their corner to wash bears preemptively out of their short positions. Of course, global market sentiment today is causing rather a headwind than a tailwind. 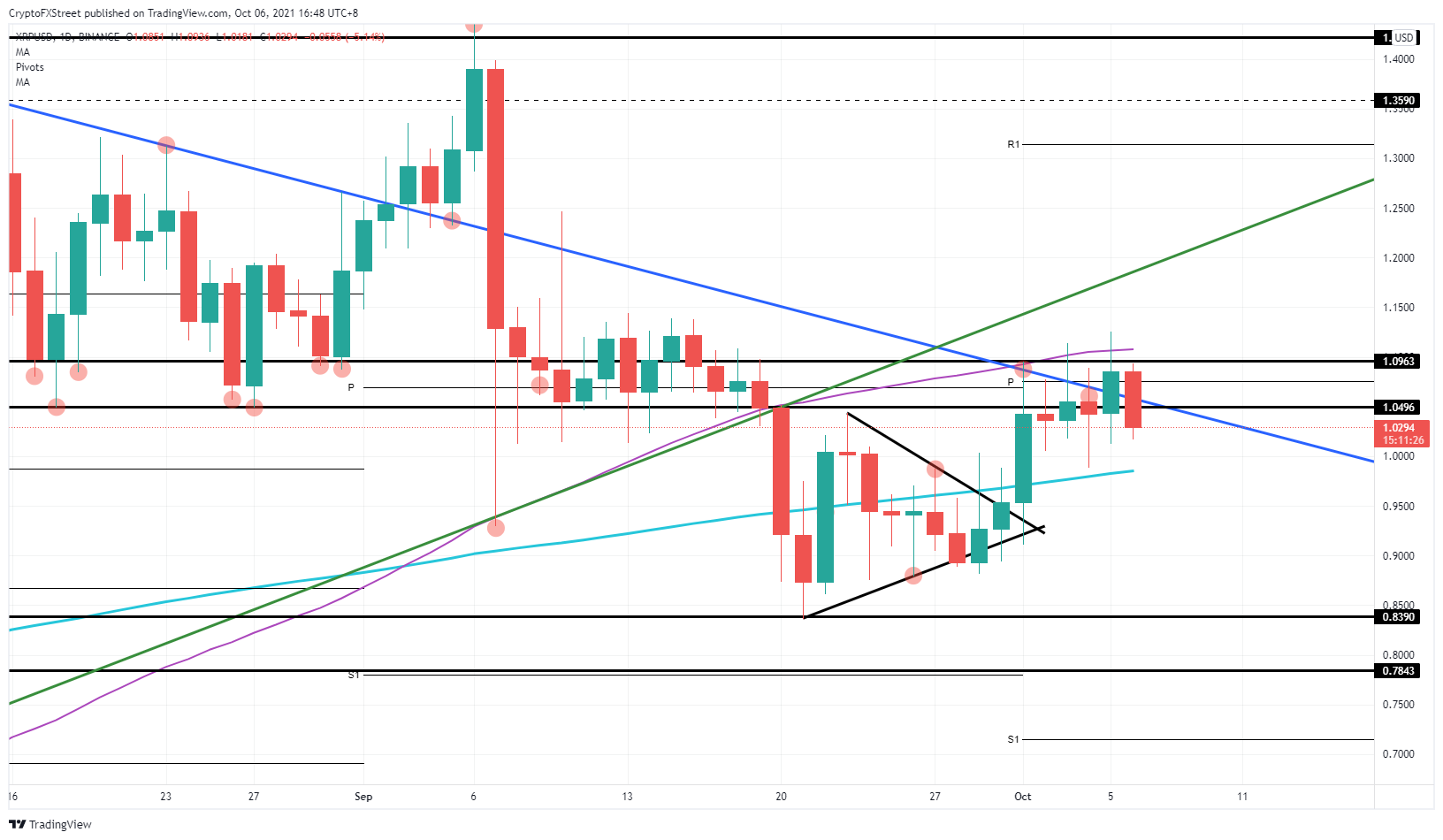 Once the dust settles and markets are switching back to risk-on, expect that bulls will shift XRP price action back into fifth gear and ramp price action back up for a retest and break of $1.09 and a possible break onwards.